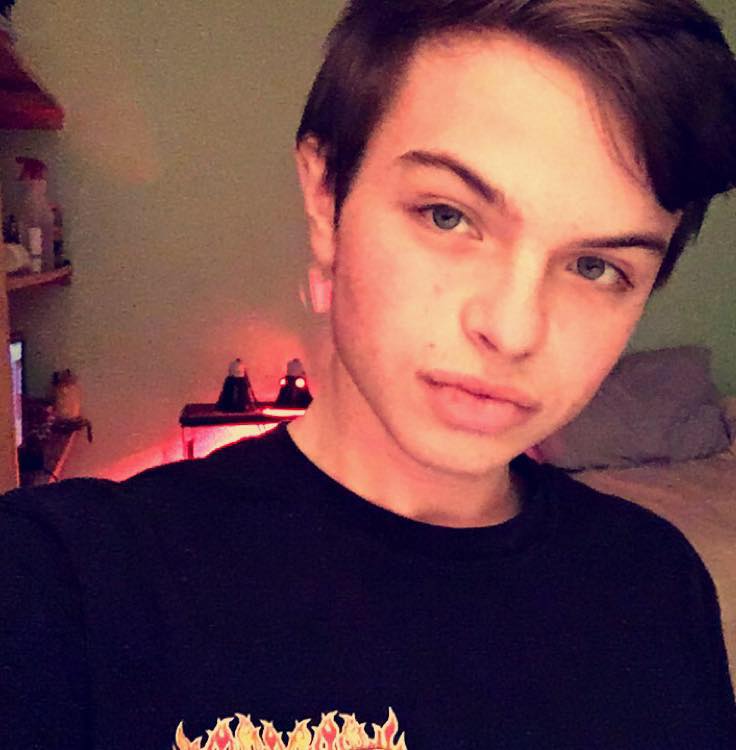 Dylan Thomas Gross was a good kid.
He was a happy child, always had a big smile on his face. He loved music. He loved reality TV, his favorite being “Bad Girls Club,” a show that chronicled the lives of a group of, well, bad girls and their misadventures. He talked about the show with his Central High School classmates and friends. They all watched it and talked about it. Dylan’s dad, Eric, would tease him about it, but that didn’t stop him. He loved that show.

He talked about becoming a reality TV star when he got out of college. His mother, Natalie Rice, said he could do anything he wanted once he graduated from college, but that he was going to college. Dylan wanted to be a star. He always told his dad that he would make it some day and be rich and famous and be able to take care of him.

His parents are divorced, and Dylan lived with his mom and stepfather in their townhouse east of York, in the suburbs, but he was close to his dad. Dylan worried about him. He would call every day, and they’d talk about everything, the kid often giving his old man advice. When he’d meet women his single dad was interested in, he wasn’t shy about offering his opinion that perhaps she wasn’t quite right for his dad.

That’s the kind of kid he was. He was smart, one of those kids who effortlessly got good grades. A senior at Central, he had been accepted at Shippensburg and Kutztown. He chose Kutztown. He hadn’t decided on a major, but he was leaning toward psychology.

He had a huge personality. He was very outgoing. He could talk to anybody; he had a gift for it, passed down from his Sicilian grandparents on his mother’s side. He had an after-school job at the Corner Stables, a restaurant on South Queen Street. He started out as a bus boy, but it wasn’t long before he was waiting tables. It fit him. Customers loved him.

He was a good-looking kid. He kept his hair neatly trimmed. He was particular about his clothes. He wore Abercrombie & Fitch, and Hollister, and PacSun. His parents would mention shopping for clothes at Walmart or Target or Old Navy, and he’d make a face. No way he was wearing that stuff.

In photos, he’s always smiling. One photo that his mother loves is a selfie he took of himself at the controls of an airplane; his Nana had bought him and his cousins flying lessons. He’s wearing a headset. He looks happy. He looks like a nice kid, and he was. He had a nice, caring family. He had a decent upbringing. He was loved.

He was also an addict.

The first indication was in August 2014, when he was 16. He’d been in a car crash; he was a passenger. He wasn’t hurt badly, just a few cuts and scrapes, but he wound up in the hospital with alcohol poisoning. His parents chalked it up to a kid just experimenting. Dylan could never do anything halfway.

Then, on Thanksgiving that year, his mother noticed something different about him. Something just wasn’t right. She asked him whether he was on something. He didn’t say, but she could tell. She called his doctor’s office, and the person told her that the doctor would probably want to drug test him and that he would call back.

He didn’t call back.

She called a friend and asked for advice. She didn’t know what to do. The friend advised to take him to Crisis Intervention, which recommended an outpatient rehab. Dylan signed up. His mother said the program was a joke, that it didn’t help her son. Part of that might have been that her son didn’t want any help.

His mother clamped down. He was pretty much on lockdown, only permitted to leave the house to go to school and to work. She took his cellphone away and monitored his social media interactions. She wanted to keep him safe, to keep him away from the temptation to use again.

On Feb. 13, 2015, Dylan overdosed. His mother found him in his bedroom, unable to move or speak, his eyes rolling in their sockets. He had taken what the kids call “Triple C” — a mixture of gel tabs of Robitussen and Coricidin Cold and Cough. It was Valentine’s Day weekend, and it was hard to get help. She made several phone calls, trying to get him into an inpatient rehab. At the hospital, she tried to have him committed to the psych unit for 48 hours so she could try to find him some help. The hospital declined to commit him, the doctors telling her that her son didn’t have a mental health issue, that his problem was addiction.

He went to a juvenile rehab, a 28-day program. His mother wasn’t sure whether it would work; she just knew he wouldn’t get better. At the very least, he would be away from drugs, and he would be safe.

He came home and signed up for an outpatient program, signing a consent form that allowed the rehab to share information with his parents. When his mother called the rehab to find out how Dylan was doing, she was told he hadn’t been showing up. His mother was furious. Dylan signed the consent form. Why hadn’t anybody called her to let her know that he wasn’t showing up? She never got a good answer.

On the Fourth of July – it always seemed to coincide with holidays – Natalie was going through his things in his room, checking for signs of drug use.

That was when she found it.

She had no idea how he was able to get it, or use it. He was still on lockdown, allowed to leave the house only for work or outpatient rehab. She called Dylan’s father and told him what she had discovered.

She called the woman at the rehab to tell her that Dylan wouldn’t be back, that she was seeking an inpatient program for her son. And then she asked the woman whether she knew that Dylan was using again. The woman said she was aware of it. Why didn’t anyone tell her? his mother asked. She spoke with the woman’s supervisor, who said she’d look into it and get back to her. She never did.

He did 21 days at a rehab in Allenwood, Pa. When he returned home, he looked good; he looked healthy.

Then things just spiraled out of control.

His parents had no idea what to do. They had tried everything, it seemed, and nothing had worked. They felt powerless in the face of his disease, his addiction. They can’t describe how terrible that feels, to have absolutely no power to keep your child safe.

His parents saw him on March 10, a Thursday. He looked terrible, they said. They felt they needed to get him into rehab again, even if he didn’t want to go. They just wanted to get him off the streets in a place where he would be safe.

His father arranged to meet him at a restaurant. Meanwhile, he made calls to rehabs and found one in West Chester that would take Dylan. When he met Dylan, he told him he was taking him to West Chester. He pleaded, “Let me take you there.” Dylan wasn’t going. “You can drop me off there, but I’ll just need to find a ride home,” he said.

He says he was a ‘bad person,’ but he saved a woman from an overdose (Mike Argento column)

Eric called Natalie, who said to take him home, that she would call the cops and meet him there. As they approached his father’s house, Dylan spotted the police cars and said, “I was set up.”

The police talked to him. Natalie asked the cops to “302” him, take him involuntarily to the psych unit for evaluation and treatment, just to get him off the street. The police asked Dylan if he was a danger to himself, and he said no. The police couldn’t do anything.

Natalie knew at that moment that it would be the last time she saw her son alive. She just knew it. She hugged Dylan and told him, “I love you so much.”

The next day, Eric was on the road, driving from Carlisle to Somerset in his rig when he got the call. Dylan was in Memorial Hospital. He had overdosed.

Eric called Natalie, who rushed to the hospital. Her son was in a treatment room, unconscious.

Eric thought about turning around but didn’t. He began to cry. He remembered looking at the sky through the window of his truck. It looked different. Everything looked different. He knew then that his son wasn’t going to make it.

He answered the phone.

When she could, she told him, “He didn’t make it.”

He drove home, three and a half hours, crying.

His son had died two days after his 18th birthday.

And now their son was gone.

They wish something could be done to help parents in similar straits. They wish that there was something they could have done to keep him safe.

They just aren’t sure what that is.

“You just feel powerless,” his mother said. “You want to protect your children, but you feel just powerless. In the end, it’s the addiction.”

One of his teachers from day care came. Another woman told his parents that her daughter had attended pre-school with Dylan and had always liked him. Some of his elementary school teachers visited with the family. Students at Hayshire Elementary School, where Dylan helped out now and then, sent cards they had made themselves.

His father said he was proud to see so many people there, that it helped knowing that his son had touched so many lives, that he was loved.

Dylan, he said, was the center of attention.

“It’s what he would have wanted,” he said.

His parents had his ashes placed in a number of small urns, sharing his remains with his family. His father said he would keep the ashes by his bed so that Dylan was always close.

His mother said she planned to take his remains to the beach and scatter them, putting Dylan to rest at the place he loved the most.

They want to do something to memorialize their son. They want people to know his story.

They want, most of all, to know that Dylan will not be forgotten.